Sail in for a Solomon Island Surprise 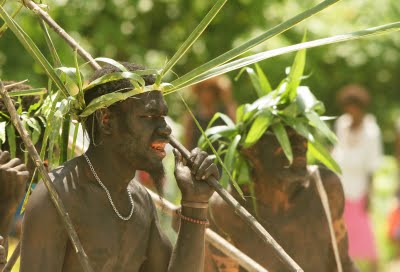 The Solomon Islands are a mystery to most Pacific Island vacationers. Adventure cruiser, Roderick Eime, reckons all it takes is a little bit of curiosity and a sense of history to be bewitched by this emerging destination.

The ghostly group approached us timidly, looking curiously in all directions. Mainly young men and a couple of boys, all smeared head-to-toe in lurid orange mud, they scanned the bushes, the tree tops and the tall grass. Clearly in fear of being observed, they moved cautiously as if any or every movement would betray them.

While these orange interlopers patrolled the gathering, women and men in traditional village attire danced and chanted energetically. The women, in particular, cavorted in a way that would have the missionaries covering their eyes and rushing for their bibles. Their hands firmly on their hips, they gyrated unambiguously, throwing their heads back in mirth.

But it wasn’t long before the orange mudmen’s imagined bogeymen materialised. Slim, lithesome and painted as black as the proverbial, their mouths were bright crimson as if full of fresh blood. They stalked the citrus-coloured troupe, snarling and mocking the orange men with menacing, wide-mouthed laughs and jabbing long, sharp spears. Forced into a terrified huddle, they ducked and dodged the increasingly nasty thrusts.

The scenario played out for a just a few minutes and our alarm grew as the younger ones clung nervously to the quivering legs of the elders, but the finale was approaching and the assembled local villagers cat-calling and laughter grew more enthusiastic as the bewildered mudmen scurried off into the bush at the point of a lance.

The final act played out, the entire cast reassembled for a curtain call and our cameras clicked furiously. Those without cameras applauded appreciatively.

Here on Santa Ana Island in the eastern province of Makira Ulawa, the ancient traditions are preserved and gleefully recreated for the occasional tourist group. The significance of this performance is explained as a representation of the arrival of foreign people and their disruption of local custom. There is some dispute however whether the new arrivals are Europeans or Polynesians. I imagine they’re interchangeable.

Santa Ana is one of several outlying islands that maintain strong cultural traditions, as much for themselves as a marketable commodity for visitors. Either way, all parties are winners and our visiting group display great interest in the multitude of artefacts and handicrafts set out for perusal.

The islands in the immediate vicinity are theorised to have been first settled by the ubiquitous Lapita people around the time the Romans were getting underway in Europe. Scattering their trademark pottery throughout the Pacific, anthropologists still debate the actual migration route, but it is generally believed to have been from the west and dependant on the sea levels current at the time.

At the Busu Cultural Village on Alite Island in Malatia Province, the centuries-old tradition of shell jewellery and currency has its home – a kind of shell mint Again we are met by energetic dancers, although instead of mud, coral and animal teeth, these handsome performers are draped in intricate shell ornaments.

Certainly the most prominent example of shell currency is in the payment of bride price and to illustrate this ritual, a nervous young girl clings to her booty clad in a veil of tiny shells painstakingly woven together to form calciferous garments. She doesn’t appear too pleased at the drawn out ceremony and I must assume she’ll be more enthusiastic when the real day arrives.

The men of Busu Village adopt a decidedly threatening pose. Their job is to protect the women during any exchange or barter that involves transactions of the shell currency which they produce laboriously in the huts behind. Weapons and the skills required to use them are displayed, just in case we get any ideas.

The most significant confrontations and combat synonymous with the Solomon Islands are the furious and bloody battles fought between the Allied and invading Japanese forces during the Second World War. Some of the most ferocious fighting took place around the capital, Honiara, on the island of Guadalcanal throughout 1943.

The war history of the Solomon Islands would easily occupy several articles and the history of the campaign and the many relics, wrecks and material left behind continues to attract amateur historians and sightseers. Overgrown and abandoned tanks, crashed aircraft, sunken vessels of all types and forlorn fortifications draw curious visitors all year around.

Many of the most interesting artefacts are below the waterline, particularly around the island of Gizo (also sometimes spelled Ghizo) in the Western Province. Local dive operator, Danny Kennedy, regales us with wartime tales, particularly his favourite one, that of his namesake President, which took place not far from his little shop in the township.

While patrolling nearby Blackett Strait in August 1943, the President-to-be was in command of PT-109 when it was cut in two by a speeding Japanese destroyer in the middle of the night. The surviving crew swam to what was then Plum Pudding Island before finally being rescued thanks to heroic efforts by two local village boys. The island is now named Kennedy Island.

Danny regularly takes divers to visit his catalogue of dive sites that includes both natural and manmade attractions. Fighter aircraft and various shipwrecks make up most of the program, but the Toa Maru, lying virtually intact in just a few metres of water is the piece de resistance. At 7000 tons, the Toa Maru is possibly the largest, best preserved and divable wreck in the Pacific.

The best way to travel the many islands that make up the Solomons is by small ship expedition. The experience of arriving by ship is hard to surpass as each arrival is usually accompanied by a flotilla of local canoes decorated with flowers and costumed “warriors”. Coral Princess Cruises’s flagship, Oceanic Discoverer, is now a familiar sight in Melanesian waters as she completes her itineraries between Papua New Guinea and Auckland.

Like its neighbours Vanuatu and Papua New Guinea, the Solomon Islands share the natural hospitality and friendliness of its Melanesian population while offering greater depth and richness to the entire region thanks to its many natural and human attractions.