Drugs in Sport: No Dope About it

Drugs in cycling are a thing of the past, present and maybe even the future.

As the world reels from the Lance Armstrong doping revelations, there are those who say “I told you so”, others who shriek “I don’t believe it” while yet more who say, “seen it all before”.

No-one is going to tell you Lance Armstrong was the first athlete to attempt chemical or pharmaceutical advantage in the race to cycling’s first place, but the once venerated Tour de France has degenerated into a Tour de Farce with claims and counter claims from the many accused competitors. Now it seems pretty clear that anyone in the first half of the field has to be seen as suspect.

Turn the clock back and it soon becomes obvious that doping and push bikes go way back to the very beginning of the Tour in 1903 and beyond. In his book, Dope: A History of Performance Enhancement in Sports from the Nineteenth Century to Today, author Daniel M. Rosen asks the question: “Who was the first coach to dope his cyclists?”

Fingers point quite assuredly to a nefarious character who was himself once a champion athlete, albeit in middle and long distance running. James “Choppy” Warburton, born 13 November 1845, came from the rough end of Lancashire and was the eldest of twelve, and one of the six surviving children of Harriet Birtwistle.

When his own illustrious career was over and his trophy cabinet bursting with silverware, he turned to coaching cyclists, specifically those taking part in the growing sport of endurance cycling in France. Among his charges were Jimmy Michael and brothers Thomas and Arthur Linton. Both Michael and Linton died in their 20s, many believe as a direct or indirect result of dope supplied by Warburton to either enhance or diminish their performances depending on how the ruthless coach had laid his bets. 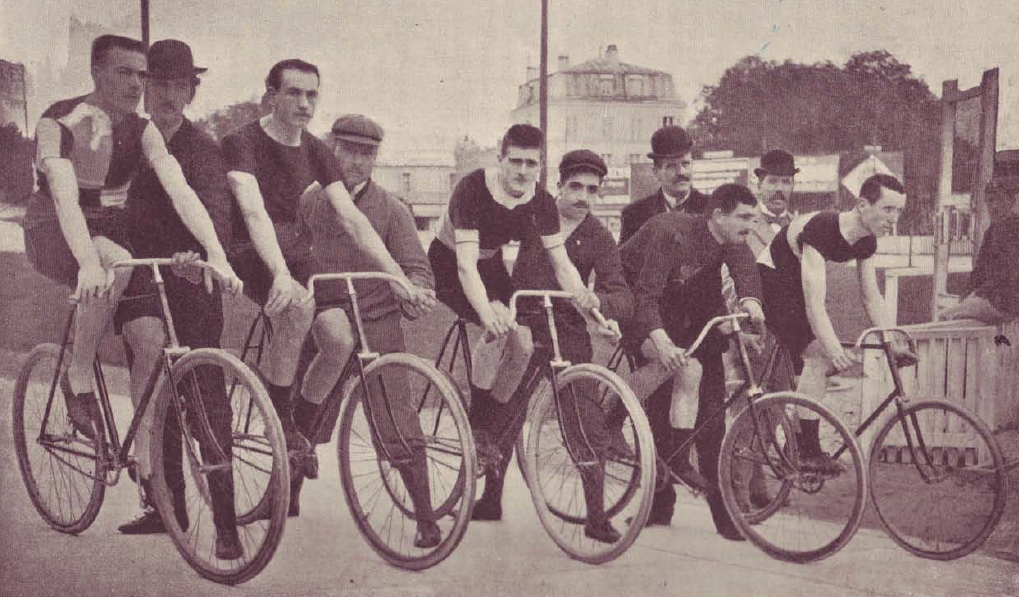 Some of the Gladiator riders in 1894: (l-r) Augier, Antony, Mercier, Linton (with Warburton), and Barden

“When Warburton’s riders were racing, ‘Choppy’ could be found racing from one side of the track to the other, offering the riders encouragement and a little more. Perhaps the reason Warburton was able to get such great performances out of his riders was because the magic potion he carried in a small black bottle contained a drug that revitalised his riders,” wrote Rosen. The formula remains a mystery, but the results were obvious. Whatever secret concoction was contained in that little black bottle, it worked wonders on his riders.

Authors Gerry Moore and Andrew Ritchie entitled their 2011 book “The Little Black Bottle: Choppy Warburton, His Mysterious Potion, and the Deaths of His Bicycle Racers”. It details Warburton’s sinister methods that ultimately saw the evil Lancastrian warned off every track in England despite the absence of any regulations against doping.

“By the 1920s,” wrote Mark Janas recently in the US Sport Digest, “drugs were already a commonplace on the Tour de France. Strychnine was used as a painkiller during the race. Cocaine was also used to ‘keep riders going.’

“By the 1940s a new drug was on the scene. Amphetamines had been developed for military use to combat fatigue and to help aircrews stay alert. The top Tour riders soon found amphetamines necessary to remain competitive. Even by the 1950s, there was no ban against performance enhancing drugs.”

Janas reminds us that alarm bells were ringing loudly about the dangers of stimulants and other drugs as early as the 1950s. The suspicious collapse of the entire Belgium team in 1956 was attributed to “bad fish” and it is widely believed that the Tours of the 1950s were all won by riders on amphetamines. These suspicions were confirmed by five-time Tour winner Jacques Anquetil, himself an unrepentant doper. Even so, doping rules did not come into place until 1965 and then only five years after the death of 23-year-old Danish rider, Knud Enemark Jensen, in the 100km event at the 1960 Olympic Games. His autopsy results were covered up and attributed to heatstroke, but later a coroner confessed that his body was riddled with amphetamines.

So 1965 marks the beginning of the illegal doping era in cycling and draws attention to perhaps the most famous case of recent times, that being the death in the 1967 Tour de France of the much loved 29-year-old Englishman, Tommy Simpson.

In 2002, author William Fotheringham penned the biography of Tom Simpson, Put Me Back on My Bike: In Search of Tom Simpson, with a revised edition following up in 2007 as a result of the deluge of new material that poured in as a result of the first. Inspired by an amateur film of the same name, Fotheringham laments the passing of Simpson in the same way the film’s dedicated producer, Ray Pascoe, a life-long fan of Simpson’s did in the self-funded documentary. 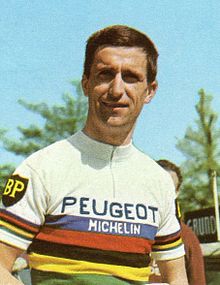 Tom Simpson. Died in the saddle from a suspected overdose (Wikipedia)

For those, including this writer, who need reminding, Simpson died on the 13 July 1967, on the blisteringly hot 13th stage of the Tour de France, near the summit of Mont Ventoux. He was an Olympic medallist, a world champion and the first Briton to ever wear the coveted yellow jersey, which he did in 1962. Driven and ambitious, Simpson regularly pushed himself to the limit of endurance and, perhaps recalling a failure to perform at the 1956 Olympic Games at just 19, vowed never to let his team or himself down again – no matter what it took.

“The collapse came two miles before the summit of Mont Ventoux on the thirteenth stage of the race from Marseilles to Carpentras. Simpson had been riding well through the day; all that struck one of his team mates was that he was taking drinks more often than usual. At the bottom of the Col he had been dropped by one of the leading groups, but towards the top of the climb he was still well up in the broken field and trying to regain contact with Aimar’s small pursuing group 200 yards ahead.

“Then, as the few eye witnesses described it, he faltered in his riding and fell over to the side of the road. The British team car was right behind him. Harry Hall, the team’s chief mechanic, helped Simpson remount his cycle, but Simpson fell once more.”

Simpson, delirious and clinging to his handlebars with a deathly grip was given emergency resuscitation by officials and the Tour doctor and rushed to hospital at Avignon by helicopter. He was officially declared dead soon after arrival with the cause listed as “heart attack” but the examining physician refused to sign a death certificate and a toxicology report was called for. The finding of two full vials of amphetamine in his jersey, plus a further empty one, was more than sufficient evidence to suspect an unnatural death.

No inquest was held, or certainly no results were made public and it took a journalist, James L. Manning, a sports columnist for the Daily Mail, to break the news with the telling line: ‘Tommy Simpson rode to his death in the Tour de France so doped that he did not know he had reached the limit of his endurance. He died in the saddle, slowly asphyxiated by intense effort in a heatwave after taking methylamphetamine drugs and alcoholic stimulants.’

Simpson could be likened to the Armstrong of the day, drawing the spotlight to the dangers and inherent risks of drug taking in cycling and sport in general. Instead of diminishing the prevalence of drugs and doping, Simpson’s death drove the practice to even more sinister and underhand depths involving masking and inhibitors to cloak the practice.

Janas concludes with some exasperation “It could easily be argued that because doping has been part of the sport since its inception, it has become in fact part of the culture of cycling. Thus, ethical questions regarding doping in cycling may perhaps have different answers than in other sports.

“Either way, it is likely that the advent of new technologies such as genetic engineering will pose a new set of challenges, issues, and ethical questions for cycling and other sports.”

Put Me Back On My Bike: In Search of Tom Simpson by William Fotheringham

The Little Black Bottle: Choppy Warburton, His Mysterious Potion, and the Deaths of His Bicycle Racers by Gerry Moore and Andrew Ritchie

Dope: A History of Performance Enhancement in Sports from the Nineteenth Century to Today By Daniel M. Rosen