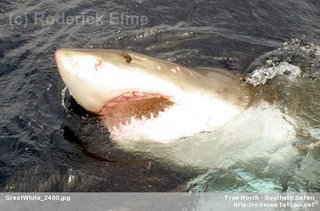 The enormous chunk of tuna flesh bobbed on the end of the line supported by a small foam ball. Matt ladled great gobs of minced gills and guts onto the surface creating a lumpy, letterbox red slick just behind the boat. Then he struck.

We’d seen his ominous black shadow patrolling beneath us like a menacing midget submarine probing for a weakness, but nothing prepared us for what happened next. In a heart-stopping explosion of gaping crimson jaws filled with rows of razor sharp teeth, the 5 metre, 1000kg monster breached its full torso out of the water in a triumphant display of total dominance. Gotcha!

Underwater, the view is even more terrifying. The seemingly flimsy aluminium cage appears barely strong enough to withstand the fury of this consummate killing machine. Those who remember the Jaws trilogy will recall the complete inadequacy of the metal sanctuary and in no coincidence, many of the scenes that employed live sharks as stunt doubles to the mechanical star were filmed in these very waters. Rodney Fox, the famous diver who displays gruesome body décor courtesy of the great white, is moored alongside with his own clients.

The cage is tethered to the stern with tough mooring lines and divers enter via a manhole in the top. Air is surface fed via a compressor and up to four ‘clients’ squeeze together in a tantalising clump that draws hungry and inquisitive gazes from the circling creatures. Our feet are hooked under a rail in the floor and we cling nervously to handles arranged around the sides while surveying the waters for sharks through viewing holes which strike me as overgenerous. Suddenly there’s a tug on my shoulder and a rubberised finger jabs frantically into the gloom. That famous theme tune plays in my mind as a dark shadow slowly morphs into a full size predator with a very determined purpose.

For thirty minutes we watch totally awestruck as three adult great whites glide effortlessly past in search of the tuna bait dangling rather too close for my liking. That lifeless, inexpressive eye is a porthole to a tiny brain pre-programmed for one task only. A ladle of guts excites them and they’re now intent on the juicy prize. Mouth agape and on target, Matt jerks the bait away at the last minute but the shark lunges again taking the chunk whole, thrashing heavily against the cage’s already dented structure. The water around us is full of bubbles and froth both from the shark’s turbulent antics and our combined hyperventilation. “Mmmerrh!” I scream incomprehensibly into my mouthpiece.

Moose, a 5m male Great White Shark, is a regular visitor off Neptune Island at the very end of South Australia’s Gulf St Vincent and is identified by the red tag applied by Andrew as well as the multitude of battle scars. The nearby Australian Sea Lion colony keeps the carnivorous monsters hanging around, preying on some of the four thousand pups born here each year. Andrew and Matt operate shark cage diving expeditions from nearby Port Lincoln and are regularly booked out months in advance, but today is a special charter for passengers from the luxury expedition yacht, True North, undertaking its inaugural Southern Safari itinerary in the azure waters around South Australia’s peninsulas.

Purpose built for the burgeoning domestic adventure cruise industry, Broome-based North Star Cruises operate the 740 tonne, 36 passenger boutique vessel between March and September among the astonishing rock formations and wilderness waterways of Australia’s Kimberley region. But such is the demand for new and exciting destinations from the growing throng of repeat customers that the company has been obliged to seek out new activities during what were once the off months.

“Our style of touring is very Australian,” says director Craig Howson, also along for the ride, “Some folks take a little while to settle into our deliberately informal atmosphere, but after they’ve got used to bare feet, t-shirts and char-grilled Wagu beef fillet or lobster tail for dinner there’s no going back.”

At the close of the Kimberley season she sets sail for Papua New Guinea via Darwin and Cairns before heading to Sydney for New Year festivities. The brand new, 8-night Southern Safari is a creative utilisation of the return journey to Perth. After taking on its cargo of discerning guests in Adelaide, True North then heads momentarily south to explore the abundant wine region of McLaren Vale before making the crossing to Kangaroo Island. After that, it’s the visual and gastronomic delights of ‘tuna town’ Port Lincoln, Coffin Bay before the trip’s culmination in Streaky Bay.

Expedition cruising is often a mix of the sublime and the ridiculous and North Star Cruises’ version is a well-balanced blend of gourmet cuisine, natural, historical and ethnological enrichment with the occasion adrenalin burst thrown in for good measure. True North is one of the very few local vessels equipped for helicopter operations which she makes use of in the Kimberley and PNG.

After the jaw-dropping exploits of the great marine marauders, those not totally spooked don wetsuits for a serene swim with the sharks’ preferred foodstuff. The playful pups and young adults are almost jumping out of their skin in anticipation and are quick to engage in exuberant interaction when the swimmers enter the water. The mammals swirl and twirl in an aquatic ballet around their hopelessly inept and oversize playmates, yet display a generous tolerance that keeps us entertained for over an hour. It’s tragic to recall this delightful naivety was repaid with lethal consequences when both British and American sealers plundered the happy herds to near extinction in the 19th century. Even today the species are still listed as rare and endangered.

Back in Port Lincoln, there’s a visit to Matt Waller’s tuna farm and again we’re in the water hand-feeding his baby (20kg) Southern Blue Fin. More foodie frolics ensue in Coffin Bay where tray after tray of delicious oysters are served up in various concoctions with surprisingly good local Port Lincoln wines. Coffin Bay oysters are not, as the name might suggest, endemic shellfish, but rather the imported Pacific gourmet variety which thrive in the ideal conditions along the west coast of Eyre Peninsula.

The adventure winds down in Streaky Bay and the passengers, many now friends for life, gather to exchange final farewells before setting course for home. The chatter is overwhelmingly positive with many openly scorning the mass market, big ship alternative. Even by local standards, True North is one of the smaller such vessels but its track record, including two national awards for adventure tourism, speaks volumes for the little company in far-flung Broome and for the growing appreciation among sophisticated travellers for small capacity, intimate and personal vessels offering destinations and experiences that will always be off limits for the mega vessels.

Prices start at $6995pp and includes all meals, shore excursions and activities. Alcohol, laundry and satellite communications are extra.