“Space: The Final Frontier, … to seek out new life and civilizations …” so said Captain James T. Kirk of the starship Enterprise as he surveyed the expanding cosmos. Exploration, discovery and adventure are not the sole domain of science fiction. They have always been defining elements of the human psyche.

The celebrated psychologist, Abraham H. Maslow, called it “self-actualisation”: to boldly go where I’ve not yet been. Once mankind satisfied the lesser, more fundamental requirements such as food, shelter and community we looked beyond the horizon and wondered, “What if …?”

Sure, it took thousands of years for our sluggish and humble species to progress from canoes to steamships, yet much less than one hundred to go from powered flight to space travel. From a traveller’s perspective, now is the most exciting time in our specie’s existence.

And these are exciting times indeed. Such have been the astounding technological advances that in one lifetime, man has flown to the moon and now transverses every continent at an altitude of 10,000m in the company of hundreds of others, enjoying the latest movies and gourmet meals in pressurised comfort. To many, it’s even mundane.

Space travel fell somewhat flat after the delirium of the Apollo program. Many pundits like famous sci-fi writer, Sir Arthur C Clarke, predicted we’d be sticking flags in Mars and holidaying on the moon by now. Somewhere along the way we were sidetracked, probably because our expensive, clumsy rockets weren’t as reliable as we’d hoped. This is Second World War technology after all.

Riding what amounts to a ballistic missile still hasn’t deterred some despite a price tag equivalent to the GDP of a small African republic. At time of writing, there have been five “spaceflight participants” aboard the Russia Soyuz crafts, each paying a reported $20 million for the week long joy ride to the International Space Station (ISS). Tickets are now being sold for a planned flight to orbit the moon. Price? $100 million each. 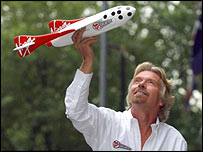 Pounced upon by Virgin supremo, Sir Richard Branson, the first commercial flights are now tantalisingly close, perhaps as early as next year. Announced in 2004, Branson’s Virgin Galactic spaceline expects to launch about 500 passengers annually. His proposed fleet of five spaceships will have a crew of two and just six passengers flying to an altitude of about 110 kilometres, the very edge of space, to experience almost ten minutes of weightlessness.

Unlike NASA’s Space Shuttle which uses huge and dangerous solid fuel rocket boosters, Virgin Galactic’s SpaceShipTwo will launch from a jet-powered mother ship called WhiteKnightTwo, and use a single hybrid rocket motor to reach its peak sub-orbital altitude. Because the craft will only travel at around 4000 km/h, it will not require heatshields for re-entry. 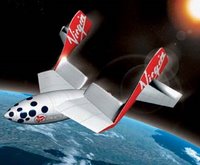 “I know there are at least ten Australians fully paid up for the flight,” said McLachlan, “and there will be more in the next twelve months for sure.”

One such passenger eagerly awaiting his moment on the launch pad is Wilson da Silva, founding editor of Australian science magazine, Cosmos, whose ticket was one of four bought by Dr Alan Finkel, the publication’s chairman.

“It’s hard to believe that it’s really going to happen,” says da Silva with obvious delight, “it’s always been a dream of mine since I was a kid.”

In Clarke’s seminal 1968 classic, ‘2001: A Space Odyssey’, Dr Heywood Floyd settles into the Orbiter Hilton for a family video call at a rather clunky terminal. The choice of the Hilton name for that movie was no co-incidence; it was a carefully engineered piece of product placement.

William Barron Hilton I, grandfather of the famous Hilton sisters and hotelier, bravely predicted in 1967: “When space scientists make it physically feasible to establish hotels in space and to transport people, the hotel industry will meet the challenge.”

Beyond an orbiting hotel, his plans extended to the Lunar Hilton, “To start with we will have only three floors, which will eliminate elevators and minimize power requirements. The multi-storied underground hotel will come later. But – and this is very important – in almost every respect the Lunar Hilton will be physically like an Earth Hilton.”

But Hilton appears to have lost the inside running to Branson and Robert T Bigelow, a rival hotelier and now aerospace magnate. His Genesis modules are already in space testing the concept of inflatable habitats for possible “hotel” adaptation. 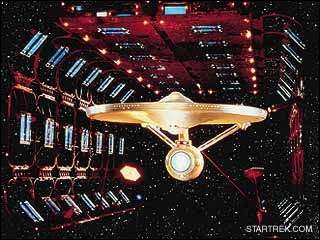 For most of us reading this far, the reality of space flight will remain a fantasy, experienced vicariously in the Sensurround stadium of the cinema. The excitement of weightlessness however can be achieved on a Zero Gravity (www.gozerog.com) flight aboard G-FORCE ONE®, the same plane used to train NASA astronauts and film Tom Hanks for Apollo 13. Located at the Kennedy Space Center, near Orlando, Florida, for just $3500 you even get a DVD of your flight.

This writer’s prediction however, is that theme park, holodeck-style virtual reality will cater for the masses long before actual space flight does. After all, it was to such a synthetic environment where Star Trek creator, Gene Roddenberry’s homesick space adventurers went to “get away from it all”. As for the visionary Roddenberry, his one-way trip to space was in an urn.