Palermo, the city of countless conquests and crossroad of cultures.

When the huge Costa Serena jostled for a berth in the busy summertime season in Sicily, it was clear Palermo was not just another big ship whistle stop. Roderick Eime revisits.

I hadn’t been to Palermo for thirty years, and I’m pleased to report that very little has changed. Last time was as a student backpacker, this time it was almost red-carpet as we filed aboard our luxury coaches for a series of shore excursions into this 2800-year-old port.

The ancient Phoenicians and Carthaginians were the first to recognize the value of the ideal harbour, with sheltered anchorages and high cliff tops for perfect defences and look-outs. These early traders and merchants operated blissfully there for some six hundred years until the Romans turned up – and they didn’t share very well. The Romans were extremely tough on the Punici and effectively drove them out of existence as well as Sicily.

The Byzantines had a brief turn running Sicily after the Roman Empire went belly up, but were blind-sided by the Saracens (Moors) in the 9th Century and the Arabs were in charge for a bit over a hundred years until the Normans, on a roll in the 11th Century, booted them out. The Arabs had moved the capital to Palermo by this stage and spawned an era of cultural and architectural prosperity.

The Normans and Arabs got along, after a fashion, and a melding of their architectures and art began to define the city. Things get messy thereafter and the next few hundred years include family feuds, and the combined squabbling of the royal houses of Spain, Germany and Italy. It wasn’t until the mid-19th century that Sicily and Palermo became properly and finally Italian.

The city took a pounding during the Second World War and much of the historic architecture was badly and irretrievably damaged, but we did manage to take in as much as we could from our ebullient and suitably shapely tour guide.

Here are some highlights of our whirlwind day in Palermo: 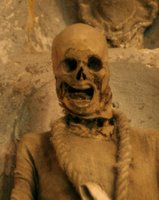 I’d seen the brochure and heard all the warnings, but nothing really prepares you for rows of dead and desiccated bodies hanging from the wall. Some of our group were clearly unsettled by the ghastly exhibition, but I felt more a sense of sadness, especially when whole families, including children, were dangling in tangled repose from the walls.

It all began in the very late 16th Century when the resident monks were looking for somewhere to store those late of the revered order. Locals soon were in on the act and it became a gesture of great nobility and pride to be strung up and dried out in the catacombs. Army generals, academics, noted civil leaders and clergy are all in silent attention, with the last being placed as recently as 1920, when the infant child Rosalia Lombardo was interred in a glass coffin. She remains the most expertly embalmed specimen in the exhibit, and looks for all the world like she might wake at any moment.

Begun in the 9th century by the Arab-Norman rulers and largely styled by the Spanish in the late 15th and early 16th centuries, the palace is still a mish-mash of cultures that so defines Sicily and Palermo. The Cappella Palatina within is the best example of the so-called Arab-Norman-Byzantine style that evolved in the 12th-century Sicily. The sprawling building has housed the Sicilian Regional Assembly since 1946.

Built in 1180 by William II, it was one of the last Norman constructions and is certainly showing its age. Inside, careful restoration is in process and we had be careful not to bump any of the delicate-looking scaffolding arranged inside. Apparently there are early Punics (Phoenicians) buried nearby.

Space does not permit me to describe the many churches, cathedrals and palaces – in various states of repair – that remain in the city. But those surviving are clearly being nurtured back to health, albeit at a leisurely Mediterranean pace.

A bus tour to the peak castles is mandatory – even though our coach did not stop despite much pained wailing – for a sample of the panoramic view of the harbour and city.

After the tour, a small posse peeled off for some independent touring (read: shopping) and Palermo certainly presents plenty of opportunity for that. Just be sure to make time for a cool beer in one of the pleasant outdoor bars and watch the city pass by.