I couldn’t look down. Instead I gazed out across the harbour toward the old city, a beautiful view and a fitting send-off. If this was my last earthly vista, so be it. “Three! Two! One!” Then I stepped into thin air at 233 metres. 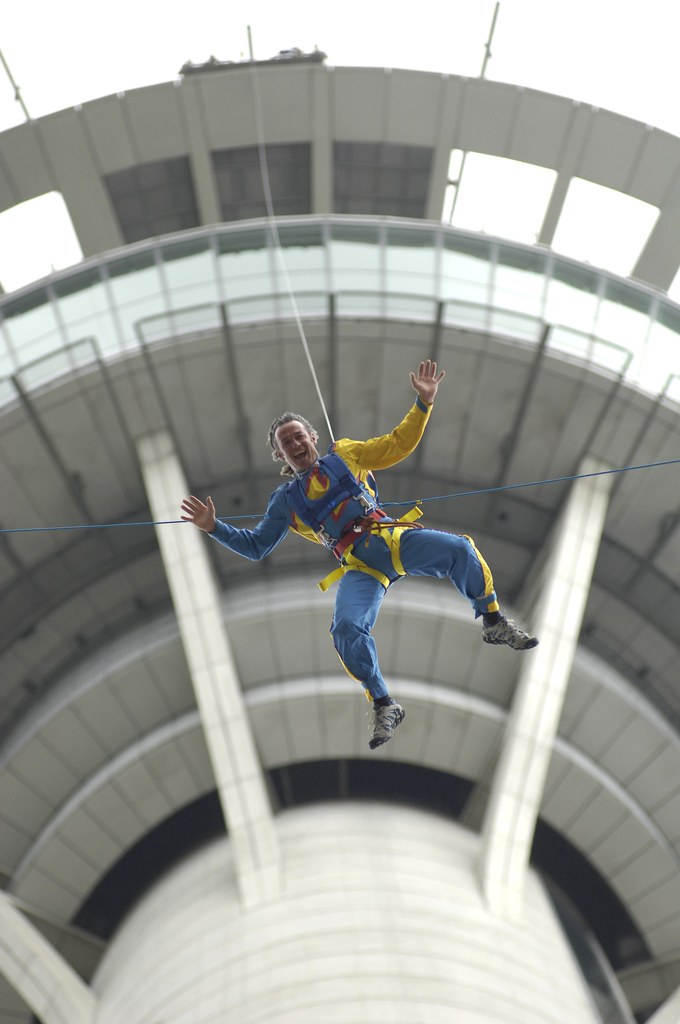 A freefall from 233m. Thankfully a soft landing (supplied)

The Macau Skyjump is the highest of its kind anywhere in the world and, according to Guinness World Records, is the World’s Highest Commercial Decelerator Descent. By comparison, the highest bungee, Bloukrans in South Africa is 216m.

Some will call this the coward’s bungee because there isn’t the dramatic elastic recoil of the long rubber variety. Instead, you’re trussed up in a harness not unlike a parachutist and hooked to a perplexing array of cables and guy wires that guide you to the bottom at nearly 80kmh.

Years ago I did three static line parachute jumps, paratrooper style, from 1500 feet. Each one scared the crap out of me, but the worst part was always the stepping out. Every nerve fibre in your body is screaming “no!” and the mental task of overcoming your self-preservation instinct is the hardest thing. Once you’re in the air and heading down, the rest is easy.

The palpable anticipation doesn’t help either and the hyped-up staff clearly delight in your terror, milking every moment as they install you in the lurid jump suit knowing that your insides are back-flipping like a circus dwarf. Fully tethered you are led to the platform like the condemned and cripes, it’s a long way up (or is that down?). The spike in your adrenalin production is the instant you step out. My heart was pounding as I free fell the first twenty metres. Then … yank! .. you come to a complete stop at 200 metres.

“Hey, look up and smile!” Yeah, it’s the photo. Try and look cool while you’re dangling in mid-air. Snap. Then the cable is “cut” and you drop like a stone toward the concrete below. This is where the decelerator bit comes in. The main cable hooked to your butt is spooling out from a giant spindle, checking your descent and maintaining your vertical velocity just below ‘fatal.’ Ten metres from pancaking on the plaza, the brakes are applied and you’re deposited neatly on the AJ Hackett target painted on the brickwork.

I’m standing up, but my knees are shaking and the adrenaline is still pumping hard – and continues to for the next couple of hours yet!

Originally published in get lost! magazine