Michael Palin, that icon of independent travel, actor, comedian and grandfather made his seventh visit to Australia to promote his latest book and TV series, New Europe. Roderick Eime hounded him, and his PR people, for two weeks to get this interview. 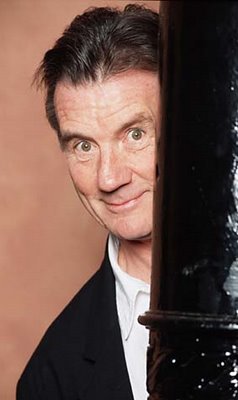 With New Europe, Michael claims to fill what has been a void in his own experience and that of many of his own generation. In all he visits 20 countries, starting high in the Julian Alps on the border between Slovenia and Italy where the Iron Curtain once ran, he travelled through the Balkans and the countries bordering the Black Sea before turning northwards through the heart of old East Europe to the Baltic States, almost as far north as St Petersburg.

I sit diligently listening and making notes, preparing for the scant fifteen minutes I will get to ask him my own questions, when he answers one, unprompted, from the podium.

It’s day 86, Estonia, and Michael has an appointment with a hirudotherapist. “After a small striptease, Ms Agajeva, a woman in her fifties and buxom in a generous, motherly sort of way is applying leeches to my torso. Why? Because Roger the cameraman thought it would be painful and unpleasant – and therefore mandatory. Apparently the application of leeches is an ancient and proven way of treating impotence, high blood pressure and a myriad other complaints.

“After fifteen minutes the little buggers are swollen and satisfied and have supplied sufficient discomfort to delight Roger. Lyudmilla, we’re on first name terms by now, dresses my wounds with a thick, industrial sticking plaster warning me that further blood loss is likely until the anti-coagulant is absorbed. Back in Tallinn I feel a celebration is in order and I end having more than a glass of wine or two at the excellent restaurant in Tallinn’s Hotel St Petersburg.

“Next morning I wake to a re-run from The Godfather, the bed and my T-shirt are soaked in blood and I look around for the horse’s head that thankfully is not there. I rip off Lyudmilla’s military grade bandages to an ear-splitting noise and the promised 300 mls of blood sprays around the bathroom. Now it’s like a scene from M*A*S*H. I tidy up, check out and am well on the way to Latvia before someone discovers the frightening scene I’ve left behind. It was a charming hotel though.”

The lunch continues amid intermittent waves of laughter and applause, and yes, someone urges Michael to sing the lumberjack song, which he obligingly does, only in German, to a rapturous ovation.

After the 200 metre queue for book signings disperses, I prepare for my introduction. “Hello Michael, I’m Roderick” to which he looks at me with the hint of annoyance reserved for such a feeble attempt at humour. “No, really” I say, handing him my card. He looks at it and then at me with a revised, apologetic gaze, “Oh, you poor man.” My copy of New Europe is duly signed with an official apology from Pontius Pilate. But I’m forgiving, after all I have him to thank for my freedom. (If you haven’t seen Life of Brian, then the joke is lost and you’re probably not reading this anyway).

My turn. Michael, your experience at the Hotel St Petersburg had us in stiches, was that your worst hotel experience?

“Well, to be fair it was me who spoilt it, the hotel was excellent. But several places in China were pretty strange and one comes to mind: the Rongbuk Guest House was a stand out.”

This is how Michael describes it. Day 60, Himalaya. “From the filthy, littered courtyard to the soulless concrete rooms with broken windows and the foul, doorless lavatories, Rongbuk Guest House is pretty much a hell hole.”

Michael adds some flavour that was missing in the book. “It’s run by a bunch of monks whose minds are clearly elsewhere. The toilet was down a freezing corridor and just a slit in the floor. So many people had used it over the years that there was this stalactite of frozen excrement protruding out of it. A shame, such a spectacular location right next to Mount Everest.”

“Our lodge in the Torres del Paine National Park overlooking the glaciers was just the most magnificent location.”

Day 161 from Full Circle: “Few souls have ventured far into the park at this time of year and we have the hosteria almost to ourselves. Sit by the wood-burning stove, playing dominoes and drinking seven-year-old scotch with seven thousand-year-old glacier ice. Sometimes work is almost bearable.”

On a more serious note, I ask Michael – with all his experience in branded city hotels – what is the one thing a hotel needs to get right?

“Well I think that, just like in good restaurants, a manager or person in authority should be around at all times. When a manager says, ‘Call me anytime if you need something’ they should mean it, not just between 10 and 12 or after 9. It’s service after all.”

“Hiltons, I find are particularly good. The name certainly stands for something and they have a standard of service I can trust.”

Day 80 Pole to Pole: Addis Ababa. “Culture shock as we arrive at the Addis Hilton, into a world of white faces, blond hair, thick legs, full bellies. Curfew from 1 a.m. to 6 a.m, but telephones and mini-bars. Gorgeous, sensational and wonderful shower. The dust runs off in muddy channels. My eyes are red-rimmed and sore, and I have picked up a cluster of flea bites from somewhere but I suppose that’s a small price to pay for what we’ve just been through.”

At 65, Michael Palin seems as bright and spritely as a man half his age, or just a bit older than me. For a bloke who has circled the Earth on both the horizontal and vertical perimeters, climbed mountains, crossed deserts and stood in front of a camera (for two takes) at minus 50 degrees at the South Pole, he’s in pretty fair nick. I don’t need to ask him the next question because it’s written all over him. Travel is obviously a great tonic. Drink your fill!

Palin became a Commander of the Order of the British Empire (CBE) for his services to television in 2000.

Along with each member of Monty Python, Palin has an asteroid named after him. His is Asteroid 9621 Michaelpalin.

In recognition of his many rail journeys, Palin has two British trains named after him. In 2002, Virgin’s new £5m high speed Super Voyager train number 221130 was named “Michael Palin”.

Michael Palin is president of Campaign for Better Transport whose motto is “transport that improves our quality of life and reduces our environmental impact.”

In 1993, following his award winning performance in A Fish Called Wanda, Michael agreed to (well, he had to) the naming of the Michael Palin Centre for Stammering Children.

As in all his series, Palin’s NEW EUROPE takes the form of a journey through countries with rich and complex cultures. Few have survived intact, as the ebb and flow of warring armies have continually changed the map of Europe.