Buccaneer and Succour There 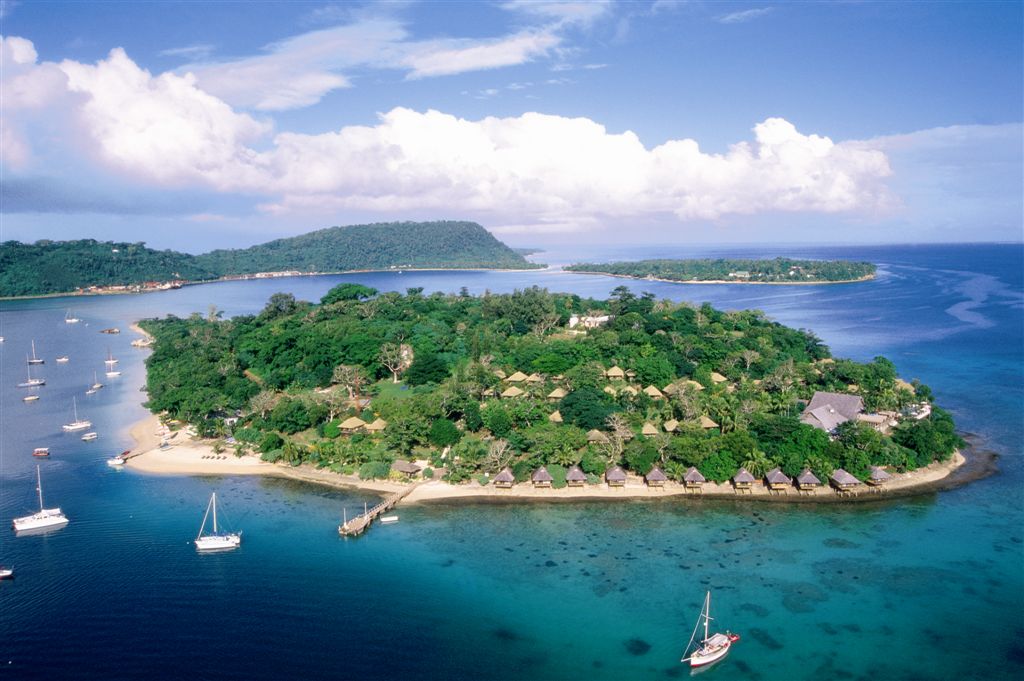 “Pull that halyard! Put yer back into it, lad!” hollers Captain Harry, as I heave and sweat on the fat rope that hoists the mainsail. “Now sweat it off like this,” he curses, pulling heavily on the rope and fixing it to the cleat.

I’d made the mistake of voicing a passing interest in sailing and Harry, eager to immerse me in the experience, soon has my flabby arms aching and sore from the exertion.

We’re aboard his classic gaff rigged schooner, Cassiopeia, full rig flying and heading out of Port Vila harbour for an evening sunset cruise. Rum-laden punch is poured generously in true seagoing style and soon the tall tales are flowing. 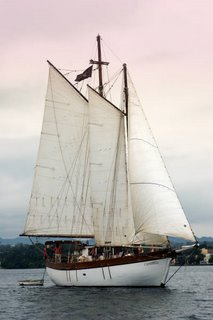 Harry is what you’d call a corporate refugee. A US-born architect, he was about to sign the biggest deal of his life, then backed out at the last minute, choosing instead to sail off for the South Seas with his new girl and rescued schooner. His flowing locks of dark hair, mischievous grin and neatly trimmed goatee make him an instant “Jack Sparrow” with a dangerous charm.

Based in Port Vila and still dreaming of the odd swashbuckling adventure, I wonder if he might be pushing the pirate fantasy a little too far, but the short excursion on the thankfully tranquil harbour is a fun and relaxing frolic, complete with eye-patches, cutlasses and muzzle loading pistols.

To the port bow is Iririki Island, “safe haven” in the local language and home to one of Port Vila’s very few luxury resorts, it was once the site of the British High Commissioner’s residence.

Opened 21 years ago, the resort and spa complex has wooed both newlyweds and the newly retired in their quest for the ‘perfect tropical island getaway’. During that time the country has had more than it’s fair share of rough weather, including airline collapses, reschedules, consular warnings and hurricanes. The resort has, astonishingly, continued throughout this turbulence and is now entering a new phase of its life.

I’m here to inspect the latest 61 luxury accommodations opened at Snorkelers Cove on the island where the developers have unveiled plush apartments and penthouses for those wishing to invest in their tropical vision. Now, instead of just staying for a few nights in ‘paradise’, guests can purchase their own apartments or penthouses for private use or investment.

As I stare out across the expanse of Port Vila’s harbour from one of the balconies admiring what is inarguably a million dollar (plus) view, I can see the many attractions of this location. There’s access to (a few) good restaurants, berthing for your luxury yacht, a spacious leisure precinct with huge infinity pool, watersports, gym and conference facilities all secreted into the careful landscaping of the island.

Some aspects however, border on the archetypal Gold Coast development, like the stark tiling and plastering in the new rooms and slightly unimaginative architecture of the apartment block. That said, the location, facilities and dining are hard to match in this remote Pacific republic. For those wishing to stay as guests, there is still a lot of attraction in the traditional fares (bungalows) with their rough wooden floors, slatted windows and old colonial feel.

Dinner at the Watermark Restaurant is a polished affair with fine French wine, delicate seafood and the trademark Santo Island beef eye fillet. The beasts on Santo live a stress free life, up to their rumps in long lush grass 24/7, and produce some of the tenderest, flavoursome steak you’ll find anywhere. Iririki’s other premium restaurant, Michener’s, named after US author James A Michener, of ‘Tales of the South Pacific’ fame, is perched imperiously above the harbour complete with its own bar and horizon pool.

As the guests tuck into their multi-star cuisine and sip French champagne and cocktails, I glance across the table to Captain Harry, still resplendent in his full Jolly Roger regalia. He has captivated two of the female guests with rapturous conversation and it is this innocent seduction that encapsulates the whole Iririki experience; an escape from an existence of mundane social obligation and conformity to the alluring colourful and romantic life of a South Sea’s scallywag. I wonder if he’s hiring.

TREAT YOURSELF TO TWO FREE NIGHTS AT VANUATU’S BEST

Book a week at Vanuatu’s premier private island resort, Iririki Island Resorts and Spa, and Coral Seas Travel will give you the 7-nights for the price of five in a private Garden Bungalow, include return air and taxes from Sydney, Melbourne or Brisbane, Tropical Buffet Breakfasts daily, return airport transfers, and even throw-in a free Port Vila and Environs tour.

Iririki Island Resorts & Spa is located just 3-minutes by free round-the-clock ferry from Port Vila town centre, the island itself once the site of the British Residence Commissioner’s Residency prior to Independence in 1980, and home to the Queen during her last South Pacific tour.

Facilities include two ‘horizon’ pools – one of them one of the largest in the South Pacific – four restaurants and cafés including Port Vila’s premier Michener’s with million-dollar harbour and town views, a white sand beach and watersports centre, Spa Frangipani for manicures, pedicures, facials, hot rock treatments and other spa indulgences, and a private snorkelling area.

The 70 bungalows are set amid lush tropical gardens or over-water in the child-free zone on the island, while 54 new Deluxe Rooms are designed for family holidaying with such facilities as full kitchens, dining and lounge
facilities, and there are also seven tri-level family Penthouses.