In the skyrocketing cruise market, there’s still room for good old fashioned charm. Roderick Eime lied about his age for a glimpse of retro-cruising, British style.

The small crowd watches on with palpable anticipation. Ted stares purposefully toward the small pile of rope rings arrayed on deck and takes his shot. His red quoit lands tantalisingly short but slides delicately toward the yellow ring occupying the coveted centre circle. Then, impact, and the yellow quoit is ejected from its smug position and deposited on the perimeter of the target, leaving Ted’s projectile in its place. He celebrates the masterful stroke with a little jig.

“Oh you brute,” admonishes Cynthia, expecting Ted to do the gentlemanly thing and allow the ladies to win. But this is deck quoits – and there are only winners and losers.

Within the burgeoning world wide cruise market, the big players are striving to outdo each other with grandeur, scale and opulence. The recent visit to Sydney by Cunard’s two enormous Queens: QE2 and QM2, the latter being the world’s largest cruise liner, is a vivid testament to the growing popularity of the mega ship experience.

While the two royal dames enthralled Sydney, following right behind were two smaller ships, Saga Rose and Saga Ruby. Had it not been for the impressive fireworks display orchestrated for the Saga sisters’ visit, most Sydneysiders may never have noticed them.

These two elegant siblings, mere courtiers by comparison, sailed gracefully up Port Jackson and out to sea to separate and continue their respective round-world cruises.

At just 25,000 tons each, the “Saga Sisters” are relatively small cruise vessels by today’s standards and carry just 600 passengers, give or take. These graceful darlings are no spring chickens either, with Rose launched in 1965 and Ruby in 1973. But they’re “proper ships” as one of our party rightly observes.

Despite continual refurbishments, the old, very British girls have not lost their charm and grace. Brass and polished wood abound and the plush lounges, bars and common areas reflect an era of yesteryear without looking tired or tawdry.

Kent-based Saga Holidays reserve their vessels for strictly over-50s, so there are plenty of good old-fashioned shipboard frolics like quoits, shuffleboard, bingo and ballroom dancing. As an underage interloper, I am tempted to look upon some of these pastimes as quaint and anachronistic, but there is no mistaking the enthusiasm of passengers for these otherwise antiquated activities. 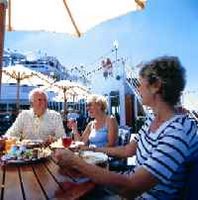 Chatting and mixing with the mainly English passengers is not as daunting as I first imagined. Sure, there’s more than enough eccentricity to go around, but there’s something to be said for the old-school, archetypal pom. They’re invariably polite, well spoken and patient, even when dealing with Aussies, and complain with such eloquence it’s almost poetic.

“Everywhere I look, there’s old people,” scoffed Roger, 79, from Bury St Edmunds, while tucking into an excellent mushroom, truffle cappuccino soup, “you just can’t get away from them!”

“And what’s been your highlight?” I innocently enquired.

“Finding a quiet corner of the library, if that’s at all possible, and falling asleep over a good book!” To which the entire table erupts into laughter while his ever-suffering wife just shakes her head dismissively in the background.

I think Roger is foxing. This is their fourth Saga cruise and he’s going again.

Certainly there are the Rogers, but all around me I see others scurrying between dance classes, health seminars, wine tastings, gym sessions and lectures from eminent academics. In one such event, I sat enthralled as Captain Tim Orchard recounted, in wonderful detail, his 20-year experience as commander of the world’s only supersonic airliner, the Concorde.

As my brief, five-day snapshot of the ship’s 100-something day circumnavigation attests, the passengers clearly enjoy a similarity of spirit and sense of restrained adventure that belies their age. I’m also impressed by the mainly Philippine service staff who go about their duties cheerfully and competently without gushing and fawning over you. The food is not only ample, but is served either in the dining room in true fine dining style or in the more relaxed Lido Buffet for those seeking a more casual atmosphere.

I stopped by the gallery and perused the photos laid out for passengers’ inspection, and see smiling faces in sequins and tuxedos interspersed with chinstrap penguins, marine iguanas and stone moai. The adjacent wall map chronicles their most comprehensive adventure and looked more like a voyage from de Gama, Dampier or Cook.

It’s hard to imagine a more dignified excursion, sailing past icebergs and tropical islands while sipping fragrant tea and eating scones with lashings of strawberry jam and cream. Oh, how youth is wasted on the young!

Saga Rose Cruises are sold exclusively in Australia by Cruiseco; 100-nights Round-World from Southhampton on January 2008 costs from $22,711pp twin-share including a 40% Early Bird Discount (EBD). “Half World” (Southampton-Sydney or vv) starts from $10,658pp with EBD. Many other Saga Cruises are available in the world’s most popular cruise destinations: as an example 22 nights in the Mediterranean in October 2007 costs from $7320pp, including 15% EBD. For brochures and the name of your nearest Cruiseco agency phone 1800 225 656; EBDs can be withdrawn at any time. Air is additional in all cases.