A Whale of a Time

When Kris Madden jumps into her Honda CRV, chances are she’s not off to the office or some shopping jaunt, but making a beeline for a whale stranding somewhere along the New South Wales coast. 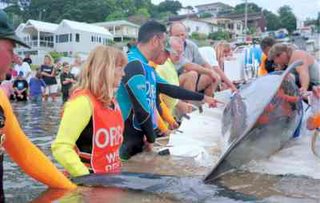 Kris is a trained volunteer rescuer, committee member and media spokesperson for ORRCA (Organisation for the Rescue and Research of Cetaceans in Australia).

“Whale strandings are a phenomenon that marine mammal experts still don’t know much about,” explains Kris, “Often the animals appear healthy in every other respect, but for reasons known only to the whales themselves, they head towards the shore and are unable to return to sea. Without human intervention, they end up dying on the beach.”

Kris and her CRV could conceivably be called, on very short notice, to any one of the increasingly common whale strandings that typically occur during the mighty mammals’ annual migration along Australia’s east coast. Last year, a record number of mass standings were reported around Australia, and volunteer groups like ORRCA worked tirelessly with national parks bodies to rescue and rehabilitate the animals and return them to the wild.

“Standing waist deep in freezing water in the middle of winter is not most people’s idea of a good time. But when the reason is to help save a beached whale, you would be surprised how people don’t give the cold a second thought.”

Citing the famous Diane Fossey as her motivator, Kris initially studied zoology at Melbourne’s La Trobe Uni, then branched out in media where she obtained her Masters Degree.

“My own ideal is to help people to understand these amazing creatures a bit more and educate them to ensure that we help their species to survive.”

Kris reminds us that the whaling industry came within a whisker of exterminating many of the great whale species. Even now, the huge, vastly intelligent creatures are still in mortal danger as environmental pressures, as well as continued “harvesting”, threatens those with a very slow recovery rate.

“Over two million whales were slaughtered in the 20th century and between the 1950s – 60s, approximately 50-60,000 whales were hunted per year. In the ‘60s it would be very rare to actually see a whale along the Australian coastline, because the hunt was so successful. It’s taken 25 years for their numbers to begin recovery since the Whale Protection Act was introduced in the ‘80s.”

Now that whale watching has become the new whaling industry, worth as much as $30m annually to tourism in Australia alone, Kris finds herself studying the tourism operations around the globe. In this quest Kris has travelled a far afield as Antarctica and Ecuador and is just back from Tonga, where tourists can swim amongst pods of huge Humpbacks.

“It’s an awesome sensation to be swimming less than 20 metres from a 40 tonne animal and calf – that weighs 15 tonnes alone,” she recalls with delight, “and then when the male sings, the sound goes through your entire body!”

Besides strandings and working with the whale-watching industry, Kris works closely with the many volunteers involved with the annual census that occurs at a dozen locations from Jervis Bay to South West Rocks. Thanks to these dedicated volunteers, valuable data about migration patterns and species movement is gathered and supplied to government authorities such as National Parks and Wildlife Service and the Australian Museum.

“When travelling up and down the coast, I don’t think too much about my little CRV. But I don’t have to. I love its reliability and confidence on the road and the 4WD makes me feel safer on the twisting, wet and sometimes unsealed roads I have to negotiate to get to the whales. I can probably say I’ve saved quite a few thanks to the CRV!”